Results of Our Work in May 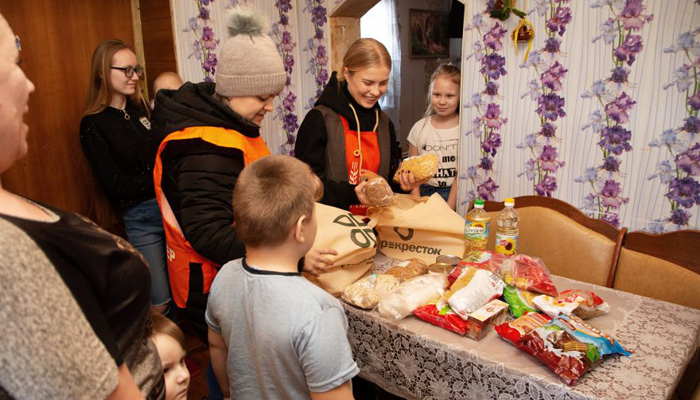 The main may day is the 9th of May. This year was held in the new format. Social workers congratulated veterans and workers of rear individually.

The Foodbank Rus participated in the initiative of the retail-network Pyaterochka and assisted in the transfer of gifts (appliances) to 33 nursing homes in St. Petersburg, Moscow, Tula, Tver, Smolensk, Yaroslavl and Volgograd regions.

Promotion of the campaign “Vam, rodnye” was organized by protesters #МЫВМЕСТЕ (#MYVMESTE). The Foodbank Rus organized the food preparation and distribution of 5,800 holiday gift sets in St. Petersburg and the region, as well as more than 700 sets in Chelyabinsk. 2,800 food parcels was delivered in Yelets, which were formed by foodbank due online campaign “Basket of Kindness” with X5 Retail Group. Mondelēz International Russia and Campina also took part in this campaign.

The new town, where the foodbank had supported the needy, has been Yelets and the neighbouring town of the Lipetsk Region. Moreover, due to the high level of organization on the part of the administration, the decision was made to open a branch in Yelets in the near future. I hope, in the newsletter next month, we will be able to tell you more about it.

The Foodbank Rus office in Chelyabinsk is one of the largest. More than 46,000 food packages have already been distributed for two months of work. In May, the importance of the work of the branch was marked by the Governor of Chelyabinsk Region Alexey Teksler.

Support of physicians campaigns are continued. Products of P&G Russia is delivered to doctors who are struggling with Pyaterochka retail-network reports doctors sweet sets in 10 regions of Russia weekly.

In May expanded the program #MYVMESTE with the accession of the company Lenta and #MagnitZabota, whose new partner became Coca-Cola.

One of the sources of the Foodbank Rus are grants. KFC Company has transferred $100 thousand to help Russian families with children in difficult situation because of the epidemic. The funds will go to support families in St. Petersburg, Rostov-on-don, Krasnodar, Chelyabinsk, Kurgan, Kostroma and Lipetsk.

A landmark event of May—the adoption of the law on taxation of charitable aid. In 2017 began the joint work of representatives of the business community, NGO representatives on the progress in tax barriers. And here we finally saw the first result. This is a big victory!

According to the tradition, I want to show you the dynamics of growth in assistance provided by the foodbank. We strive to help the greatest number of people. And at us it turns out.