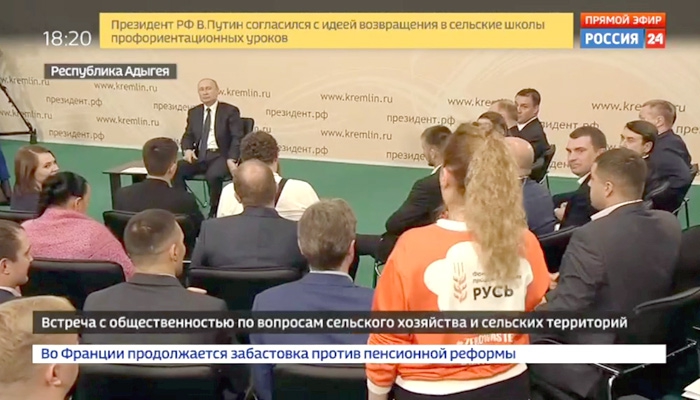 Russian President Vladimir Putin have a meeting with public during a working trip to Adygea. At the event on agriculture, the head of state spoke with a representative of the Foodbank Rus.

Coordinator of the Foundation"s office in the Krasnodar Region, Svetlana, told about the Foundation"s activities to save usable products and transfer them to charity, noting that the recipients of assistance are most often families in need with a lot of children. In a conversation with the head of state, the representative of the Foodbank RUS also mentioned the unfair situation with taxation, which forces producers to choose recycling instead of transferring to charity.

The head of state noted that when transferring goods to charity, there can be no value-added tax, and companies need to provide 2 documents to the inspection bodies to confirm the fact of transferring products to charity, one of which will be a donation agreement. Thus, the most important component of the transfer of goods to charity is the documentary support of all activities, which allows not only to guarantee the quality of distributed assistance, but also potentially makes it possible to reduce the tax burden.

According to experts, if the volume of saved food reached 1.2 mln tons, 18.6 mln people could receive free food from the Fund every month. This is how many people in Russia are below the poverty line according to Rosstat.

“I would like to thank you for doing such a good job,” Vladimir Putin said. “This problem is well known, we are constantly working on it and we are constantly discussing it with our colleagues. We are aware of this and will do everything we can to help people who are actually doing a very good job.”

Recall that by 2024, the may decree of Russian President Vladimir Putin set a goal: in six years, there is a need to reduce the level of poverty in the country by at least half. But according to Deputy Prime Minister for social Affairs Tatyana Golikova, the measures implemented today to reduce poverty don"t have the desired effect. To implement the may presidential decree, the government is likely to prepare a new package of measures to face poverty and support demographics and families with children. One of the potential tools to work on poverty problem can be food-sharing, which is practiced by the Foodbank Rus. The technology of the country"s first and only “Food Bank” effectively fights with the destruction of food surpluses, contributing to the preservation of the environment, on the one hand, and solves the problem of ensuring food security of the country, sending products to those in need, on the other hand.