Results of the Work of the Foodbank Rus in December 2020 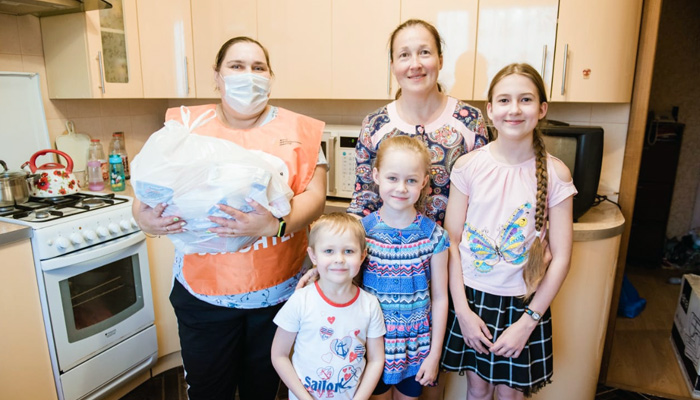 Since in 2020, we have saved from recycling and distributed more than 7,325,000 kg of food and essential goods to those in need from 54 regions of the country. This was achieved thanks to the participation of more than 4,000 volunteers. Aid went to the most needy categories: lonely elderly people who were forced to refuse to visit shops and comply with quarantine; low-income families whose breadwinners lost their income or faced reduced wages; disabled people and staff of hospitals.

According to a report by the Global FoodBanking Network (GFN), due to the COVID-19 pandemic and the crisis, the demand for food aid in the world has increased by an average of 4 times. At the same time, the crisis prompted companies to contact foodbanks and provide them with all possible support in the form of cash donations or its own products. Before the crisis, the Foodbank Rus, Russia's only foodbank, distributed about 100 to 400 tons of humanitarian aid every month, but during the pandemic, this volume increased to 600 to 800 tons. This is more than 100 thousand tons of food and commodity sets every month. We take additional precautions: work surfaces and vehicles are specially cleaned, all employees and volunteers in the warehouse work in personal protective equipment, and before going on shift they undergo mandatory training, receive masks, antiseptics and gloves.

Plans for the Future

Our priority is to increase the volume of assistance. For eight years of work, our Foundation has managed to reach the top 3 Russian NPOs, annually saving 6 thousand tons of good products worth more than RUB 1 bln rubles from recycling. We can safely say that this figure can be ten times higher. At the same time, in Russia, about 17 mln tons of food are disposed of annually due to the expiration date. Well, of course, we can't save the entire volume, but if we can legally make food processing less expensive from a financial point of view for business, then it will go much faster. Under current laws, it is cheaper for manufacturers and retailers to wait for the expiration date of products and dispose of them.

In June, the problem was partially solved—a law was adopted that exempts food products donated to charity from income tax in the amount of no more than 1% of the company’s revenue. Charities are very much waiting for the same decision in terms of VAT. This will save up to 1.2 mln tons of food annually, which means that it will be possible to feed the absolute majority of people in need in Russia.

Another important task of the Foundation is to expand the geography of assistance. Since the beginning of the year, we have opened 10 branches in 4 districts: Central (Vladimir, Ryazan, Lipetsk, Kostroma Regions), North-Western (St. Petersburg and Leningrad Region, Karelia and Pskov Region), Southern (Rostov Region and Krasnodar Territory) and Ural (Chelyabinsk Region). The plans for the next year include Moscow and the Moscow Region, Ivanovo, Yaroslavl, Yekaterinburg and Veliky Novgorod. The maximum plan for our team is to involve manufacturers of consumer goods in all regions of Russia.

Automation and digitalization in our time cover almost all spheres of human activity and the non-profit sector is no exception. The Foundation creates its own electronic database of beneficiaries in all regions of its presence, implements electronic document management and has already launched a digital program of targeted support for poor families with children “Food Card” together with the Magnit chain of stores and Humanventure.

Using ration cards, families-participants will be able to purchase food products in the amount of RUB 1,000 every month. The mechanics are transparent: the Foodbank Rus assigns an individual food card to each family in need, the account of which is replenished monthly with 1,000 bonuses. For bonuses, the family buys basic food products in Magnit stores. 1 bonus point is equivalent to RUB 1. Our goal is to help 2 mln families who are declared as needy according to Rosstat.

Both companies and individuals can add funds to the product Card balance on the продкарта.рф. The following regions were selected as the first pilot regions participating in the program: St. Petersburg, as well as the Rostov and Vladimir Regions.

We believe that digital technologies will help to involve even more caring people, both volunteers and ordinary donors, which will allow us to systematically solve problems to ensure food security.